The 2022 Cisco Broadband Index, which provides global workforce insights on access to internet services concluded that broadband connectivity is much more than just the ability to access the Internet. It powers an individual’s access to basic needs, including healthcare and education, as well as empowers them to participate in the global economy.

Internet infrastructure is a great concern for the country’s growing number of hybrid and remote workers, according to the study.

Some 9 in 10 (90%) respondents who perform their role entirely from home, and 89% of workers saying their job is hybrid, state broadband must dramatically improve if people are to work from anywhere.

For its part, the South African Government’s target is to ensure 80% of the population can get online by 2024.

Its SA Connect national broadband program focuses on increasing basic minimum speed at 42,000 sites from 10Mbps to 100Mbps to aid the drive for planned universal connectivity.

The stated aim of policymakers is to “forge a new economy in a new global reality”, using a mix of public and private finance. Respondents agree: 87% of them say access to fast, reliable Internet is critical to South Africa’s future economic growth.

A further 88% of workers feel speedy and stable networks are vital to develop a well-educated and informed population.

Meanwhile, 9 in 10 (90%) declare everyone should be able to securely connect to fast, reliable Internet when in public places or while on the move, regardless of location.

A total of 63% of respondents say they were unable to access critical services such as online medical appointments, online education, social care and utility services during lockdown, due to an unreliable broadband connection. Consequently, 86% would like to see the national infrastructure plans sped up to meet growing demand.

Affordability of connecting to reliable broadband will become a headache for the population according to more than 2 in 3 (68%) of respondents, while 67% say broadband should be provided free of charge.

There is particular concern for low-income families, as 86% of workers believe are this group is being priced out of getting online. While 71% state Internet services cost too much, a large majority (68%) would be willing to pay more for a safer broadband connection – revealing workers are keen to ensure secure online activity.

More than half (52%) of respondents say they will seek to upgrade their service in the next 12 months; but of those who won’t, 16% believe it’s too expensive to do so. 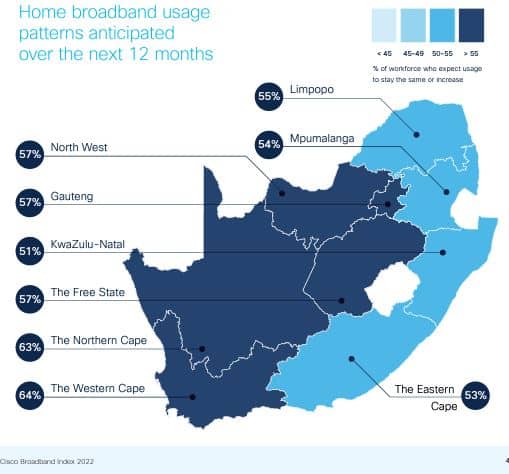 For 3 in 10 (30%) respondents, speed of their domestic connection is a pain, with this proportion saying it is only average or weak. Meanwhile, almost 1 in 4 (23%) grade the reliability of their home broadband service as average or poor.

Household connectivity is clearly under pressure: 60% of respondents claim at least three people under their roof are active online simultaneously throughout the day. This is key when factoring in the 65% of respondents who say they either do their job or run their business from home.

Furthermore, demand is set to grow with 57% of workers overall claiming their household’s Internet activity will increase or stay the same during the next year.

Cisco Government Affairs Director, Charmaine Houvet says, “The pandemic has shown us the true value of access. Citizens are increasingly saying that access to Internet must be considered a human right and that governments have a responsibility to ensure that internet access is broadly available.”

The success of hybrid work hinges on the quality and availability of the internet adding that 75% of South African workers say broadband services need to dramatically improve to support this new way of working. The Index shows that nine out of 10 workers surveyed in the region say the reliability and quality of broadband connections is important to them.

Almost half of teleworkers globally are planning to upgrade their internet service over the next year, and South Africans are aligned to this plan (53%). 92 % respondents use their broadband at home for four hours or more each day. Meanwhile three or more people use the internet at the same time in 62% of households.

“Secure, high-quality, reliable internet is critical to make hybrid work successful,” said Jonathan Davidson, Executive Vice President and General Manager, Mass-Scale Infrastructure Group, Cisco. “We are working closely with our global service provider customers to change the economics of the internet and help them reimagine internet infrastructure to make it better and more accessible to connect more people and businesses who rely on it.”