Is Polkadot ready to be awakened and follow the rest of the “Ethereum killers”?

Over the past weeks, we’ve seen many of the cryptocurrencies hailed as “Ethereum killers” achieve impressive returns. This was largely due to the fact that Ethereum’s recent network upgrade did little to ease high transaction fees and network congestion.

Ethereum has been a victim of its own success as higher network usage came with higher fees and slower transaction times.

Will Polkadot catch up to these “Ethereum killers”, or is it just quietly building its empire in the shadows?

Right now, blockchains fall into one of two major categories. They’re either purpose-built and designed for a very specific function—like Bitcoin, which was specifically designed as an alternative payment system and store of value.

Or they can be more open and general in their functioning and can be applied to a wide range of uses like Ethereum or Cardano, which can be used for building decentralised applications (dApps)—which are basically just blockchain-based versions of regular apps, like the ones you get on your phone.

Polkadot has been designed with one purpose in mind, to unite an entire network of blockchains – from Bitcoin to Ethereum to all those other cryptocurrencies you’ve never heard of.

As things stand, developers have to choose which blockchain to build their applications on. Each chain is unique and has its own strengths and weaknesses that developers have to weigh up when deciding where to develop. For example, Ethereum has a large network that is robust and easy to use, but it’s relatively slow and expensive. While competitors, like Solana, were built for the prioritisation of scalability.

The Problem: Blockchains Can’t Talk to Each Other

To understand what Polkadot is and why it’s so promising, we need to start by outlining one of the largest problems in the blockchain and crypto space right now: blockchain interoperability. This is a fancy way of describing how blockchain networks communicate with one another.

Blockchains can’t really communicate with one another – which really limits crypto’s whole “rebuild the financial world from the ground up” narrative.

If you choose to develop on Cardano, you won’t be able to interact with the Ethereum blockchain, and thus, you lose the large ecosystem Ethereum has to offer.

Simply put, Polkadot acts as a framework for all blockchains that opt-in, a bit like how the programming language HTML enables websites, browsers, and servers to interact with each other. The idea is to take care of messy and costly cryptocurrency mining processes (including validation of transactions and security protocols) and enable developers to focus on creating blockchain-based apps.

Ready for a run-up?

After the hotly anticipated Ethereum upgrade last month, many were hoping that it would solve Ethereum’s high transaction fee issue, but all the evidence has pointed to the contrary. With Ethereum’s high fees and network congestion still not fixed, the month of August saw many Ethereum competitors or “Ethereum killers”, as they’re known, gain momentum.

Ethereum is clearly feeling the pressure – over the last five months, we’ve seen Ethereum lose over 20% of its dominance in the smart contract crypto category. This means that, for the first time ever, developers are not only looking for alternatives to Ethereum to create their apps, but they are actively using them at an accelerating rate.

The chart below shows how Ethereum and its competitors have performed since their all-time highs in May. 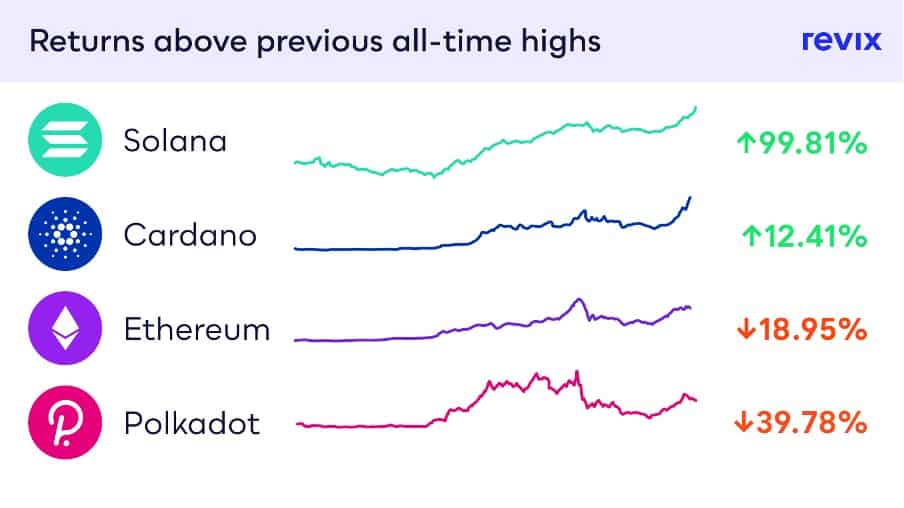 Of the “Ethereum killers,” we can see that Solana has outperformed, gaining over +99% since its previous all-time high, while Polkadot is the worst performer as it is still -39% off its all-time high.

While all the “Ethereum killers” have recovered to near all-time highs or greater, Polkadot is still lagging.

So will the sleeping giant wake up?

It seems it just did – the recent hype around the Polkadot “parachain” auction has sparked the cryptocurrency into life and awoken this multi-chain giant.

How does Polkadot create value?

Blockchains function as separate islands of data with little way of leveraging the information the other networks possess. Polkadot eliminates these concerns through their “multi-chain” network, which enables information transfer between blockchains. This is a valuable function that will be increasingly used in the future of blockchain technologies.

Polkadot enables users to build their own blockchain from scratch using their suite of functionalities while also giving you the freedom to customise anything you need.  Custom blockchains can be built within minutes and give you access to their security, scalability and interoperability.  You are also not confined to write your blockchain logic in a Polkadot specific language, but rather it accepts multiple languages.

Where do I buy Polkadot?

Through Revix, you can also gain access to their ready-made “Crypto Bundles”. Their Bundles enable you to effortlessly own an equally-weighted basket of the world’s largest and, by default, most successful cryptocurrencies without having to build and manage a crypto portfolio yourself. They’re like the JSE Top 40 or S&P 500 but for crypto.

Revix brings simplicity, trust and great customer service to investing. Its easy-to-use online platform enables anyone to securely own the world’s top investments in just a few clicks. Revix guides new clients through the sign-up process to their first deposit and first investment. Once set up, most customers manage their own portfolio but can access support from the Revix team at any time.

This article is intended for informational purposes only. The views expressed are not and should not be construed as investment advice or recommendations. This article is not an offer, nor the solicitation of an offer, to buy or sell any of the assets or securities mentioned herein. You should not invest more than you can afford to lose, and before investing, please take into consideration your level of experience, investment objectives and seek independent financial advice if necessary.