Cardano is a third-generation proof-of-stake blockchain.

Cardano, like Ethereum, will allow developers to use the Cardano blockchain for familiar features, including running custom programming logic (smart contracts) and building programs (decentralised applications). Cardano launched its smart contracts on testnet in May 2021, with a mainnet launch to follow later in the year.

However, Cardano is working on solving the scalability and energy consumption problems that its predecessors, such as Bitcoin and Ethereum have.

Cardano differs from the other projects by emphasising a research-driven approach to design, aiming to achieve an academic rigour it believes will propel the adoption of its technology.

For example, its consensus algorithm, Ouroboros, has been deemed “provably secure” by process of formal review. Additionally, Cardano’s code was written in Haskell programming language, commonly used in the banking and defence sectors.

How does it work?

Cardano’s primary use case is to allow transactions in its native cryptocurrency, ADA, and to enable developers to build secure and scalable applications powered by it.

The Cardano blockchain is divided into two layers:

2. The Cardano Computation Layer (CCL) – The CCL contains the smart contract logic that developers can leverage to programmatically move funds.

Further, computers running the Cardano software can join as one of three nodes:

Why invest in Cardano?

Cardano seeks to offer many of Ethereum’s most compelling capabilities, such as robust smart contracts. Meanwhile, Cardano was designed to support fast transactions with minimal transaction fees. Therefore, solving the current issues Ethereum is facing.

With everyone worrying about the energy consumption required to secure blockchain networks, Cardano has been built to be an energy-efficient blockchain since day one. This feature could play a vital role in Cardano’s future success and adoption.

For all the hard money enthusiasts out there, Cardano has you covered. Unlike Ethereum, Cardano has a strict cap of 45 Billion coins on its total diluted supply.

Cardano is the world’s largest third-generation cryptocurrency; therefore, it is an ultimate asset to buy if you are looking to gain exposure to this universe.

Recently, we have seen Cardano starting to show a rather large price appreciation, but what has this growth been driven by?

There are a couple of factors that are at play:

Below we can see how Cardano has outperformed many other investment assets over the past 12 months. 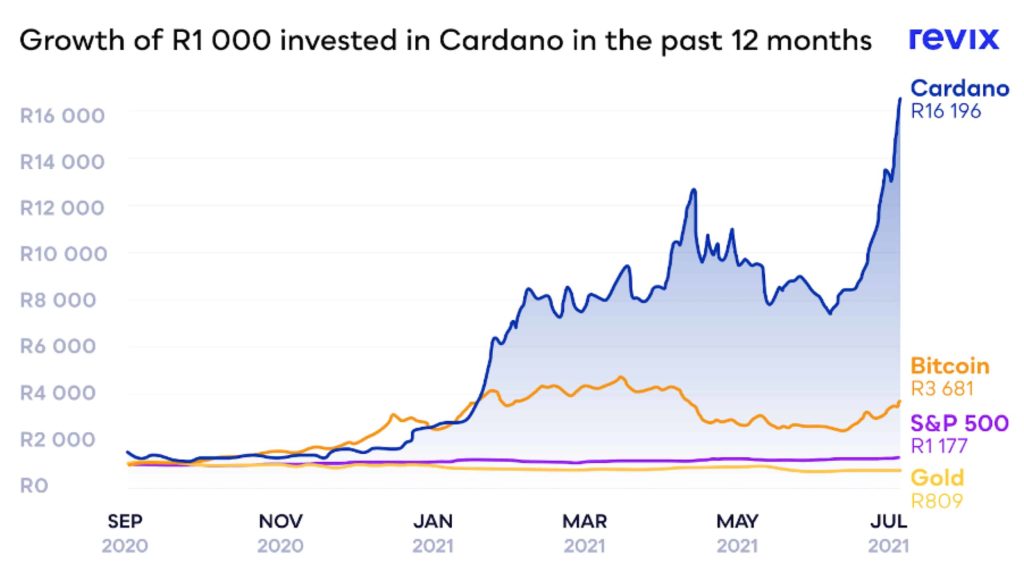 A single R1 000 investment in Cardano would have translated into + R16 196. This is substantial when compared to many alternative investments. In fact, this is a return on investment over 4x greater than if you had invested in Bitcoin over the same period (+ R3 681).

Where do I buy Cardano?

Investment platform Revix is adding Cardano to its product offering on Friday, the 27th of August 2021.

Due to the hotly anticipated release of Cardano, Revix has decided to run a two-fold promotion:

Through Revix, you can also gain access to their ready-made “Crypto Bundles”. These Bundles allow you to own an equally-weighted basket of the world’s largest and, by default, most successful cryptocurrencies.

For more information about their Saving Vault, Crypto Bundles, or a direct way to invest in Bitcoin, Ethereum, Uniswap, Pax Gold, or USDC, visit Revix.