Former CEO Ian Moir took home a salary of R13.9 million. Moir resigned as Group CEO on 16 February 2020.  The company said from 17 February Moir earned an amount of A$576 215 (R6.9 million)  as acting CEO for David Jones. Upon his departure from the group, he will receive a settlement of outstanding leave and 12 months notice pay of A$1.9 million (R22 million).

Woolworths added that the Remuneration Committee evaluated the restraint of trade agreement for Moir, which had been negotiated in 2013 and only applied to South Africa.

“In order to protect the group, an extended restraint of trade also covering Australasia was negotiated and, should Moir not breach his obligations, a restraint of trade payment of A$2.9 million (R35 million) is due to him in the 2023 financial year,” said Woolworths.

“As part of such arrangement, it was agreed that no further shares would be issued to Moir in terms of his employment agreement from 2019 onwards. Ian’s agreement entitled him to shares to the value of 150% of his guaranteed package per annum.”

In the meantime, Woolworths has paid R25.9 million additional remuneration and benefits to South Africa’s staff working on the front line.

Woolworths employs 45 000 workers and 1 492 stores in 14 countries, while South African employees account for more than 32 000 of this total number.

The company said in Woolworths SA the progress to achieving a ‘just wage’ has been considered to be a more effective and meaningful measure and disclosure of the components of a living wage for staff.

It added that the Woolworths SA base pay in stores is 47% above the national minimum wage and 13% above the Retail sector’s minimum. 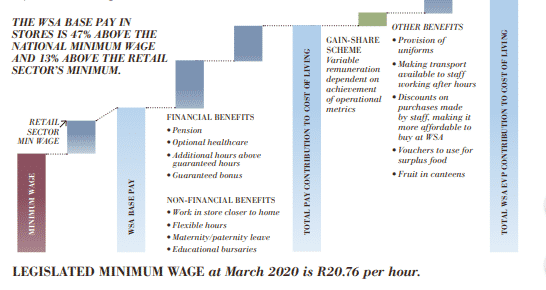 In recognition of the challenging circumstances experienced by the staff in the group during the COVID-19 pandemic, the Woolworths board, Group CEO and senior executive teams elected to forgo up to 30% of their fees and salaries for a three-month period from April to June 2020.