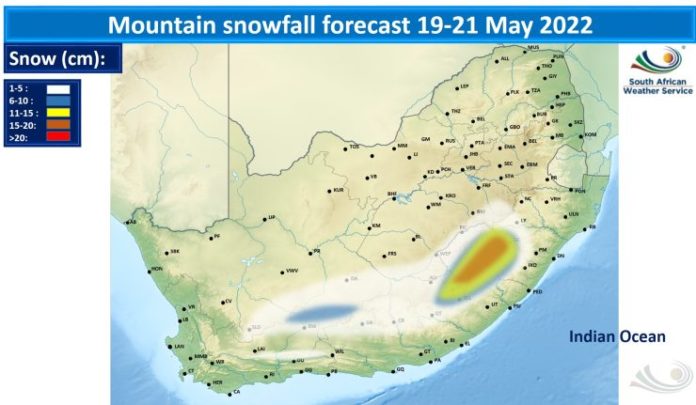 The South African Weather Service (SAWS) has warned of cold and wet weather in large parts of South Africa from Thursday into the weekend.

“A steep upper-air trough system will develop into a cut-off low-pressure system over the north-western interior of the country by Friday,” said SAWS.

“Widespread rainfall can be expected over the southern and central parts of the country from Thursday onwards, with light snowfalls likely over the mountainous, high-lying areas of the Western and Eastern Cape, spreading to the Lesotho Drakensberg regions by the weekend, where heavier falls are anticipated.”

SAWS said light snowfalls can also be expected over the high-lying ground of south-eastern and eastern Free State.

“24-hour rainfall accumulations of 25 to 35 mm can also be expected over the drought-stricken parts of the Eastern Cape,” warned the weather service.

“Moreover, there is also the possibility of isolated severe storms, accompanied by strong winds and large amounts of small hail over the central and eastern interior.”

SAWS said it will issue detailed radar-based warnings should the need arise.