MTN SAannounced today that the National Treasury had appointed it as one of the government’s services providers.

The RT15 2021 Transversal contract allows all state entities to utilise the contract for mobile communication services, which will further assist with cost containment.

In 2016,  Vodacom was appointed as the sole provider of mobile telecommunication services to the government.

The contract comes to an end.

It has been awarded to multiple Service Providers, including Vodacom, MTN, Telkom and Cell C.

There are three main categories of this transversal contract listed as follows:

There are eight types of Mobile packages available. All the mobile packages have uncapped Data without applying a fair usage policy.

Vodacom will still supply the government with two mobile packages. 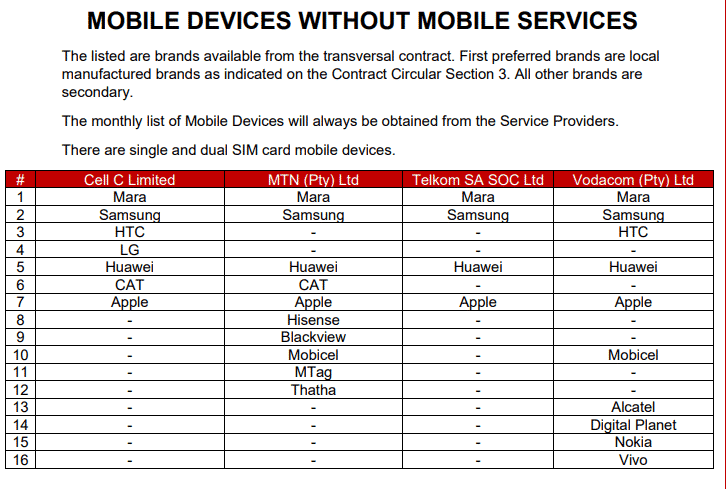 Godfrey Motsa, the CEO of MTN South Africa, said he and his executive team are proud to accept the call to serve the country by providing these vital services.

“We are both humbled and honoured by the faith National Treasury has shown in MTN with this critical partnership over a five-year term. A huge team at MTN spent months analysing the state’s requirements and then developing the very best solutions not only to meet those expectations but to exceed them,” Motsa said.

“We were delighted with the very positive reaction from the RT15-2021 bid committee to our service offerings and we are so proud that a company that is South African to its very core, will be delivering to our entities of state.”

The RT15 or transversal contract enables government to acquire the supply and delivery of mobile communication services with the provision of Uncapped Data without applying the fair usage policy on all mobile packages available.

Independent tests have, in recent years, consistently shown MTN to hold the Best Network in South Africa title unequivocally, and the reach and quality of the network have been an important contributor to the award, but more can be achieved for the people of South Africa, the company said.

The allocation of the temporary spectrum by the telecommunications regulator, in the face of the COVID-19 pandemic, showed the power and agility that lies with the purposeful allocation of additional spectrum. With the temporary spectrum, MTN has been able to zero-rate over a thousand health and education websites, expand its reach into underserved communities and further boost its quality in high-density areas.

“The allocation of permanent spectrum will see government services and officials, through the RT15 contract, being important beneficiaries of the spectrum’s immediate value through further enhancements to MTN’s superior network, expanded reach into currently underserved communities and further quality gains in all parts of the country – which is why we are anxious to support any moves to mediate a solution to the current spectrum delays,” Motsa said.

Wanda Matandela the Chief Enterprise Officer at MTN SA, said the scale and scope of RT15 make this both critical and fascinating.

“In addition to mobile devices, accessories and value-added services, there are vital operations that must be maintained, such as air operations, the needs of the special task force, sea, rail, satellite and other critical functions. We at MTN are deeply encouraged by the responsiveness of the bid committee to our solutions and we look forward to serving our state, as part of the panel of service providers to government, with cost-effective and quality solutions that will help facilitate its work in serving the people of South Africa,” he said.