The support to a group of 61 towns may be in a form of state funding.

The plan is open for public comment until 20 March.

The NSDF is described as the first of its kind and according to the government it seeks to make a bold and decisive contribution to bringing about the peaceful, prosperous and truly transformed South Africa, as articulated in the Freedom Charter, the Reconstruction and Development Programme and the National Development Plan.

Furthermore, the new plan aims to create a network of regional development anchors driving the new rural economy that will necessitate the development of a very different local economy in those towns built up over generations and sustained by a model of either largescale commercial agriculture or subsistence agriculture.

Once the plan is adopted and implemented, the anchor towns will benefit through new agriculture support entities, cooperatives, equipment, fertilizer, market support, funding and research will need to be introduced in towns in rural areas to support a new type of farmer.

“Municipalities, who will have to ensure new and appropriate land management in such areas, may also be expected and/or called upon to assist new role-players in the local economy with establishing new agricultural and non-agricultural-related economic activities,” reads the new plan.

“In this, they will require very specific support from the national and provincial sector departments responsible for agriculture and rural development, who will themselves also have to take on new roles in the light of the new dawn in rural South Africa.”

Rural communities will increasingly also demand better levels and higher speeds of connectivity, both by road and rail and by broadband.

With regards to national spatial development, South Africa should see the roll-out of lightning-fast broadband access throughout the country within less than a decade.

In order to ensure that the country is not left behind, the plan states that the following are imperative:

(2) the prioritisation of well-functioning, key national road and rail networks to ensure the creation of a densely integrated functional national economic system

To achieve this, the NSDF must, within the broader ‘family’ of strategic and sector plans of government: 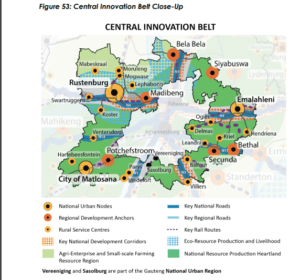 These are South Africa’s regional development anchor towns as identified in the NSDF:

This Draft NSDF highlighted the persistence of colonial and apartheid spatial patterns and their detrimental impact on the ability of government to meet its national development objectives of reducing poverty, inequality and unemployment.

To rid the country of this stubborn historical spatial stranglehold, a theory of change was developed that relies on, and proposes radical and decisive intervention in the national:

• Spatial development logic and pattern;
• Natural resource use and maintenance profile; and
• Patterns of ownership of, and access to, land and other resources.

The desired national spatial development vision, logic, and pattern, as put forward in the NSDF hold out the real promise of a very different South Africa by 2050.