Mauritius is an island that is famed for its beautiful beaches and for its reputation as an “African success story”. Since its independence from the UK in 1968, it has had tremendous economic progress, consolidated its democracy and maintained political stability.

AfrAsia Bank and New World Wealth have reviewed Africa: Wealth growth by country, 2008 – 2018 as part of their 2019 Africa Wealth Report.

The 2019 Africa Wealth Report provides a comprehensive review of the wealth sector in Africa, including HNWI trends, luxury trends and wealth management trends in 17 countries and 20 cities across the continent.

Total wealth held in Africa has risen by 14% over the past 10 years (2008 to 2018). Africa’s performance was constrained by poor performance in the three largest African markets, namely: South Africa, Egypt and Nigeria.

Mauritius was the top-performing individual market during this period. Ethiopia also performed well, although it should be noted that it started from a very low base, which makes growth easier – average wealth in Ethiopia currently stands at around $650 per person which is still very low.

Botswana’s growth was impressive when considering that wealth per capita there is already quite healthy at around $7,900 per person.

As reflected in the table below, Mauritius was the best performer in Africa over the past decade. 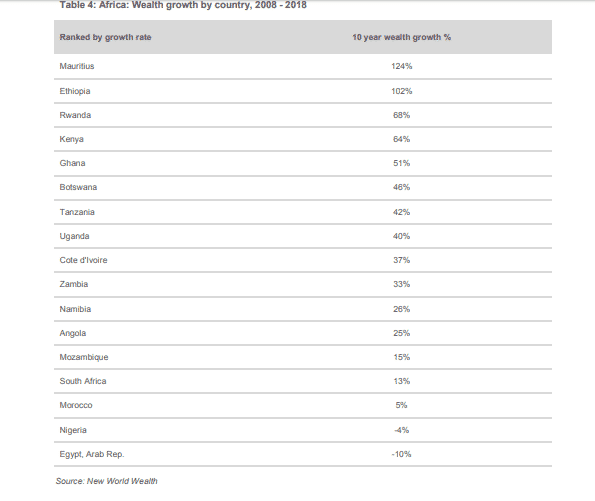 Mauritius was also the 2nd fastest-growing wealth market worldwide during this period (after China).

Possible reasons for this strong growth include: