South African enterprises took a step backward in digital transformation over the first year of the pandemic, as disruptions, lockdowns and staff unable to maintain operations remotely slowed down the roll-out of new systems at head offices.

This is one of the startling findings of the Digital Corporation in South Africa 2021 research study, conducted by World Wide Worx with the support of Syspro, Dell Technologies, Intel and Cycan.

The slow-down came despite expectations that remote working would accelerate digital transformation, due to the demands it placed on companies to be able to operate digitally.

As many as two-thirds of respondents said they had gone backwards in digital transformation, an indication that the pandemic slowed efforts to digitalise organisations. While many of these had slowed only a little, one in five, or 20%, said the fall had been significant. This, in turn, hampered their efforts to create an efficient remote workforce, with almost the same proportion – 24% – saying they had only a few staff members working remotely throughout the year.

On the other hand, the proportion of companies that increased their levels of digital transformation over the first year of the pandemic, 15%, is close to the proportion of those who had all staff working remotely – 18% – over this period.

Almost two-thirds (64%) of South African enterprises expect all staff to make a full return to the workplace, with fewer than one in five (18%) expecting to accommodate half or less. This means, while the world of work will be utterly changed, there is no unanimity about work-from-home being the new norm.

This is good news for the commercial property industry as well as infrastructure providers, who will be tasked with equipping organisations for a more flexible future. 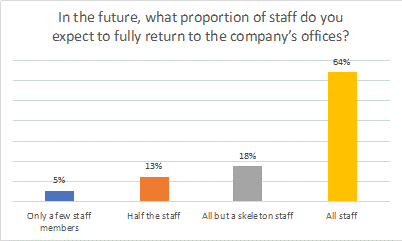 The further surprising statistic was the proportion of companies that expect staff to be on call whenever needed: one-third of respondents. A relatively small 12% of respondents expected 24/7 availability, but another 22% want staff available on an ad hoc basis at any time the company requires them outside office hours.

“While companies have almost unanimously embarked on a digital transformation journey, the majority of workforces have had to adapt to Covid-19, with the transition to remote working impacting efforts to digitalise organisations,” says Deirdre Fryer, head of solutions engineering for SYSPRO in Europe, Middle East and Africa.

Despite the slowed pace of digital transformation, only 8% of respondents decreased their spending on IT, and almost half increased this spending. This can largely be seen as a response to remote working, and equipping staff to work from home, rather than for transforming processes.

“It is not only that the digital medium is essential for working flexibly, but also that it allows greater innovation in leadership. That needs, among other, investment in innovative processes.”

Where is the spending going?

“Spending is surprisingly uniform across numerous operational categories, from computers and cybersecurity to accounting and ecommerce,” says Arthur Goldstuck, CEO of World Wide Worx and principal analyst on the project.

“However, in terms of budgeting priorities for specific technologies, one category stands out above the rest, namely connectivity. That tells you almost everything you need to know about the information worker during the pandemic.”

While some operational categories of IT spending were at the bottom of the list, none was cited by less than 62% of respondents.

The research provides the clearest picture yet of the role played by the fourth industrial revolution in the South African corporation. While cloud computing is second only to business intelligence in terms of budgeting for specific technologies, the technologies usually associated with 4IR occupy the foot of the priority table.

Says Fryer: “Emerging technologies such as artificial intelligence, machine learning, big data, and robotics are yet to become top budgeting priorities. However, what is a positive trend is that we are seeing IT spend being allocated to almost every aspect of the business and operations, laying a solid foundation for future transformation.”

Greg McDonald, director of systems engineering at Dell Technologies, South Africa, confirms that technology has served as an enabler to remote work since the onset of the pandemic.

“While most companies have embarked on some sort of digital transformation pre-pandemic, efforts to digitalise slowed with the need to focus on remote working set-ups with connectivity standing out as a priority,” he says.

“However, there is a direct correlation between how transformed an organisation is and how equipped it is to facilitate remote work. The Fourth Industrial Revolution is here, and budgeting priorities show how organisations are mobilising in response to this with business intelligence, cloud computing and software-as-a-service at the top of the spending list.”

One of the most fascinating findings of the research is that, despite the economic slump of the past year, the price of IT products is still not the most important factor in purchasing decisions, although it comes close.

The top three factors are Quality of product or service, Maintenance and after-sales service, and Price. While the latter has never topped the list in World Wide Worx research, it has always been part of what Goldstuck calls “the IT golden triangle of Quality, Service and Price”.

However, of 15 purchasing factors measured, none was cited by fewer than 75% of respondents.

“This reveals that companies have become far more demanding,” says Goldstuck. “Factors like Relationship and Future-proof of solutions (each 86%) indicate a more discerning customer, and the full set of criteria becomes almost a rule book for IT providers. The new normal is not only about providing for digital and mobile needs, then, but also about servicing a new kind of corporate customer.”

Also read: Is Remote Work Making You Exhausted and Ready To Quit? You Not Alone