Imagine you’re driving and an animal or jaywalking pedestrian crosses the road ahead. The lane flashes a warning and changes colour, telling you to slow down. If an accident does happen, the road system itself sends a signal to authorities, and if there’s any damage to the asphalt, the road heals itself.

What might seem like something ripped from the world of Tron is not that far from reality.

In this article, we explore five exciting smart road technologies currently in development around the world, based on current research and development. We take a look at what they might look like and how they could revolutionise the way we get around in the future.

Turning the road network into an energy grid

Roads get us from A to B, but what if they could do more?

With Earth’s total land area of approximately 148,900,000km,2 there is plenty of space to test out and establish new road network technology such as energy generating roads.

There are several methods in which our sprawling road networks could act as energy generators; two of which are solar and piezoelectricity.

Piezoelectric roads use special crystals built under the road’s surface to harness energy from traffic. As vehicles drive along, the downward pressure from vehicles is harnessed by the crystals to create electricity.

Israeli company InnoWattech demonstrated this tech in 2009. A year later, the company noted that 500 or more vehicles driving in one lane could generate up to 250kW per hour for every kilometre of piezoelectric road. In the US, California funded two piezoelectric road pilot programs in 2017.

Solar-powered roads, on the other hand, work by turning the road’s surface into a giant series of solar panels. While you may conjure up images of the glass panels typically found on rooves, these roadways are designed to be walked over and driven upon without breaking. So long as the sun is shining, these roads can generate power with or without traffic.

Director of tech consultancy firm Orbit Consultants, Alark Kulkarni, noted in an article from the International Journal of Engineering Research and Applications that a solar roadway could meet local energy demand up to three times over – even at just 15% efficiency.

He also stated it would be three times as expensive as asphalt, though.

Softgoza is a website that provides Whatsapp mod applications. Along with the APK files that you can download for free, we will also guide you on the process of downloading and installing the app on your chosen device.

Beyond the price, a key issue is if the road isn’t angled properly towards the sun it won’t generate as much power. Furthermore, as noted by Dylan Ryan (a mechanical and energy engineering lecturer at Edinburgh Napier University), prolonged shade cover from buildings or trees can be a problem. Even if just five per cent of the road is covered by shade throughout the day, energy production can be reduced by as much as 50%.

A solar road trial in Tourouvre-au-Perche in France, which started in 2016, was supposed to generate 800kWh a day. By 2018 it had only averaged 409kWh a day, largely because of poor alignment to the sun.

Thoughtful planning will be required to help make solar roads cost-effective and efficient when it comes to energy production.

One problem that solar roadways have overcome is being strong enough to withstand pressure from traffic and harsh weather. Tests in 2019 proved that crystalline silicone photovoltaic (PV) solar panels are durable and efficient – even in humid conditions.7 In fact, start-up company Solar Roadways has begun a trial of a solar road made up of hexagonal solar tiles in Missouri.

Better still, it can even help power another type of high-tech asphalt: LED roads!

Lighting up the path ahead

Sometimes, inclement weather can make it hard to see lane markings on the road. If the road was made up of LED (light-emitting diode) screens, it could improve driver safety and open up possibilities for changing lane configurations at the touch of a button.

Sensors, pressure plates and security cameras with motion-capture technology can work in unison to detect objects moving onto the road, allowing the road to change and display a warning to drivers. If a lane needs to be closed, this can be done with the use of LEDs rather than traffic controllers setting up road cones or barrier fences.

Using adaptive algorithms and Artificial Intelligence (AI) programs, LED roads can also save electricity by only lighting up when cars drive on them.  This could also be used by street lamps, lighting the way ahead when needed.

Ching-Cherng Sun et al. in their article “Design of LED Street Lighting Adapted for Free-Form Roads” note that such roads could:

Harnessing the power of the internet

Smart technology involves the use of software programs, sensors, and wireless networks to connect multiple devices so they can adapt to our needs. This is also known as ‘the internet of things’, or IoT, where multiple gadgets can all co-exist on the same network.

When that network involves roads and other cars, there is a whole world of possible uses.

Harnessing the internet and wireless networks will be crucial for a range of smart road technologies, but is also key to the cars of the future themselves. The USA’s National Highway Traffic Safety Administration predicts that after 2025, some cars will have fully automated safety features and be capable of driving themselves. Smart roads will be able to act as a platform which connects self-driving cars, helping them move efficiently and share any important information in nano-seconds.

Because the computers in vehicles can connect to the road, they can help manage traffic flow. For example, a self-driving car may receive information and adapt its course alongside all other cars around it. This could include:

Roads can be connected with emergency services as well, so that sensors and cameras may detect an accident and deliver information to first responders.

A number of smart road projects are being developed in China, including solar roads and the use of sensors to monitor and guide traffic flow. These automated systems use what’s called a ‘vehicle-road-to-everything’ or VR2X system.

Furthermore, a new type of street sign could adapt and change as needed. For example, concepts by Chai Toh et al. illustrated wireless digital street signs that can project images holographically or send a signal to cars where the sign, direction or guidance is presented in the heads-up display (HUD) of a car with any required audio queues.

One problem with all this technology is how much power it will require. Individual IoT devices are pretty energy efficient, but at such a massive scale it’s unclear whether VR2X system networks would increase a city’s energy consumption and pollution.

Another issue is how effectively infrastructure networks can handle human error. Whether its other people behind the wheel of their own car, pedestrians, or cyclists, even a robust autonomous network may not be completely safe – even if all the cars on the road are self-driving.

Charging our vehicles on the go

Electric cars are becoming a more popular option for drivers wanting an eco-friendly alternative to petrol-powered vehicles. However, they have the downside of being limited by their battery’s range. By turning the road network into a wireless charging platform though, electric vehicles will have an almost endless range.

As noted by Harry Hoster in his article for The Conversation, wireless electric roads that can charge vehicles will only do so when the charging coil detects an electric car battery above it, helping improve its energy efficiency and safety.

Currently there are trials of electric roads in parts of Europe, though these aren’t wireless and require a physical connection.

In Sweden there is a test track which uses overhead wires to charge electric trucks as they drive along,21 and a similar highway was built in Germany in 2017.

Also in Sweden, tech company ELONROADs is working with a consortium of businesses and universities to create a rail that sits on the road surface and charges the car electrically via connectors attached to the vehicle. A section of road has been built to charge an electric bus in the city of Lund.

As wireless charging technology improves, this technology could be implanted on the roads and make charging electric cars seamless.

Smart infrastructure that takes care of itself

While an LED future-scape with all roads being covered in screens and lights sounds cool, traditional asphalt may still be necessary. One of the downsides is that once you build it, you still have to repair it – but what if the road could repair itself?

There are a couple of ways of achieving a self-repairing road:

This technology works by heating or charging the road, causing sections of the asphalt to melt, reform and establish new bonds that remain just as strong as it was previously.

It’s estimated that if the entire planet’s road network could self-repair, it would reduce global emissions by 16% and lower infrastructure spending by 32%.

Mixing steel wool with asphalt and using heat induction or microwaves is a promising method, with tests showing that even asphalt mixes including 1% steel fibres yield good results. This technology is being trialled in different parts of the world, including the Netherlands and China – the heating induction is also being tested in China as a way of melting snow.

By utilising sensors, the road itself can determine whether or not it needs repairs. The road system can then engage its self-repairing mechanism, which saves on the amount of roadwork required, thus reducing congestion.

Self-healing roads likely won’t be able to be driven on while they repair themselves, so some lane closures and roadworkers will still be required to help guide traffic, though ideally at a reduced level. As the road is heated and reformed, repairs can take roughly three hours (depending on conditions) to fill cracks and solidify. 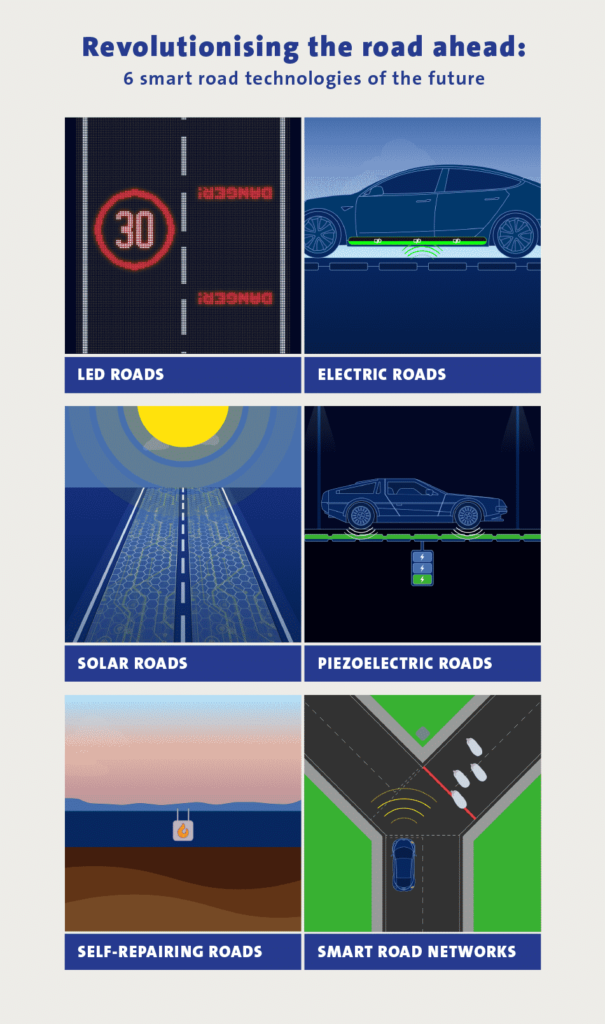