South Africa is falling well behind other nations when it comes to the rollout and adoption of carbon saving electric cars technologies, new research has revealed.

An international study by car hire comparison website StreeFreeCarRental.com has ranked the top ten countries in the world when it comes to adopting carbon saving electric vehicles, and South Africa is nowhere to be seen.

Electric cars have disrupted the transportation and technology industries. They have shown how important it is to find alternate sources of fuel and they can positively affect the environment and society as a whole.

But South Africa is falling far behind and is struggling to keep up to speed with global developments in electric vehicles. 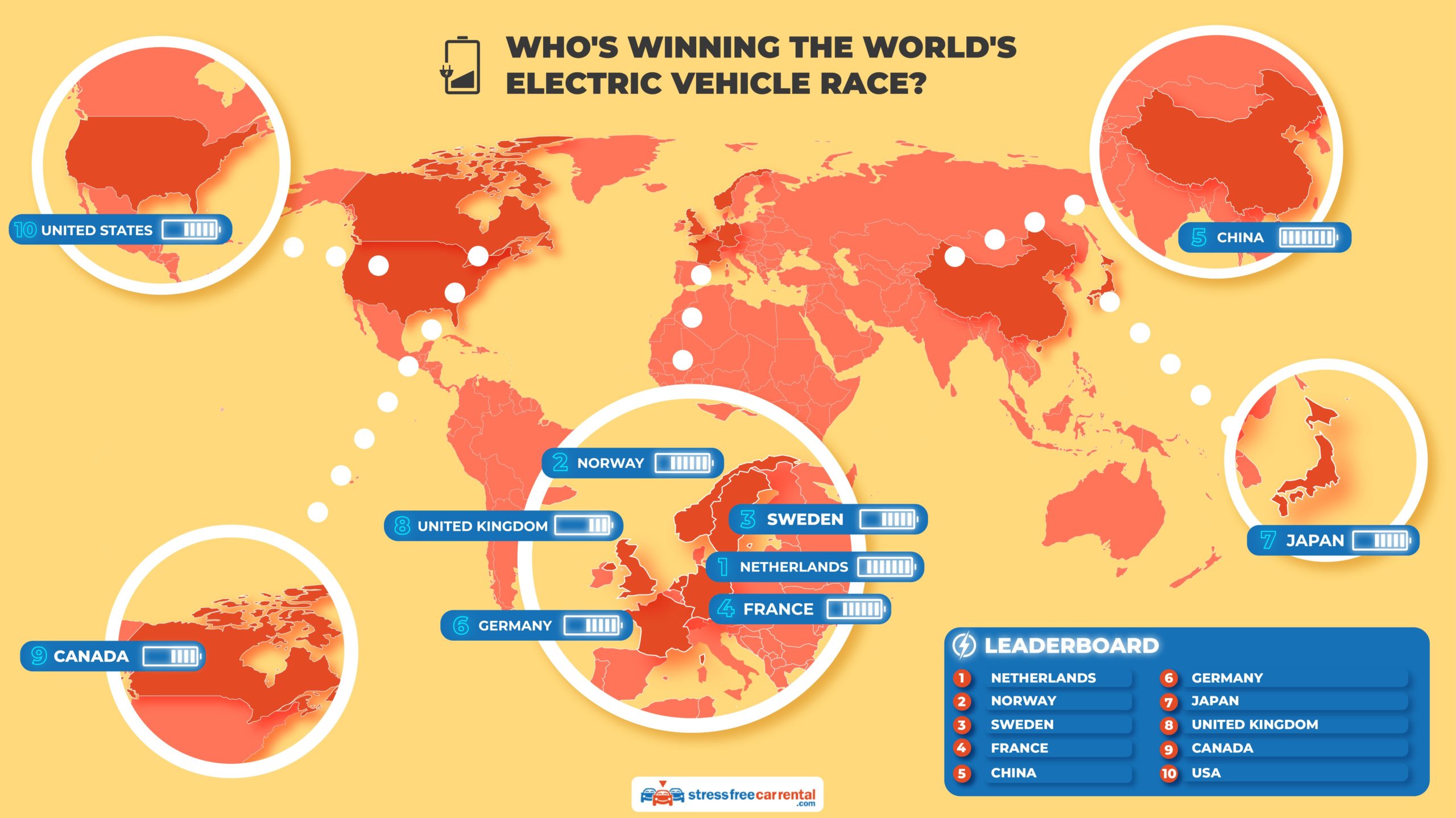 The Netherlands was found to be most advanced in the roll-out of electric cars technologies followed by Norway and Sweden with France ranked in fourth place.

Researchers looked at both electric vehicle sales per head of population and state investment in infrastructure and charging points to compile a definitive leader board of the countries showing the way when it comes to electric cars.

The study highlights how much work there is still to be done for South Africa to catch up with other countries in the race to net-zero carbon emissions.

In a new report titled the State of Electric Vehicles in South Africa, out of more than 10-million cars on South African roads, only about 1,100 are electric. This number is growing by only a handful each month. Whereas globally, numbers are growing by up to 40% annually.

To put this into perspective on the global stage, some European countries, such as Norway have over 480,000 EVs on their roads.

But there might be a deeper routed issue with electric vehicle adoption in South Africa. Electricity load shedding, a deliberate rolling blackout cutting off power to a large proportion of the grid for hours at a time, means that there can be long periods without mains electricity throughout the country. 2019 was the worst year on record for load shedding, with blackouts lasting for a total of 530 hours. The country’s scarcity of electricity represents a major barrier to investment into electric car infrastructure, which in turn makes the short to medium term large scale adoption of electric vehicles look unlikely.

Looking at tax, it seems that South Africa actively penalises buyers of electric cars with an ordinary car attracting an 18% import duty, but an electric one 25%. Current import conditions do not favour electric vehicles and South Africa does not manufacture battery-electric passengers’ vehicles to provide for the mass market. This impacts consumer choice in the switch to electric mobility. 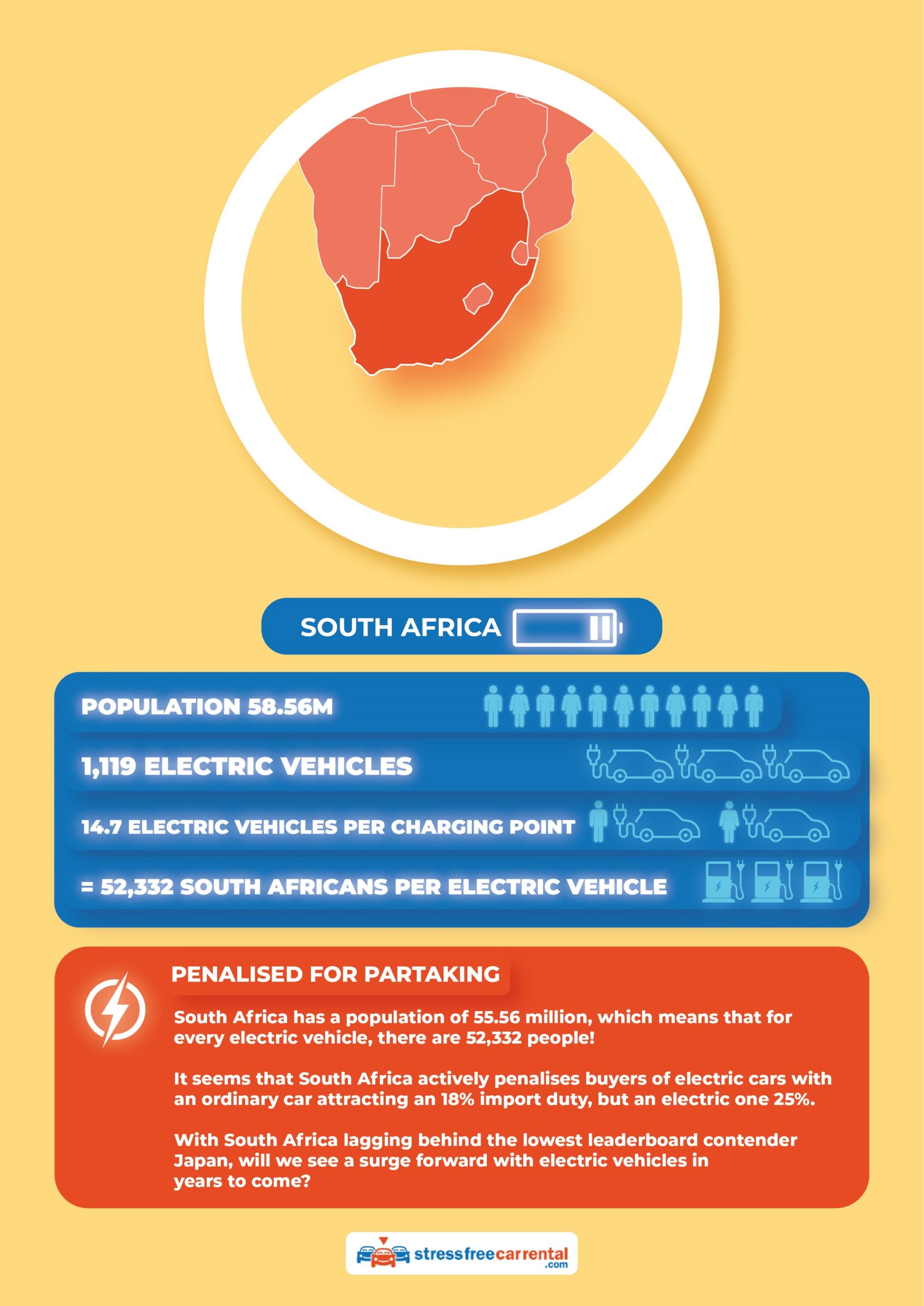 And despite it being a well-known fact that electric cars are cheaper to run than traditional vehicles with engines, South Africans feel the purchase price is a major obstacle to ownership.

But there’s more work to be done for South Africa to reach anywhere near the top ten. In the recent State of Electric Vehicles in South Africa report, the national uYilo eMobility Programme addresses the four focal points of the current standing and future of electric vehicles in the country.

“Each of these must be addressed in order for South Africa to follow the global transition to non-fossil fuel transportation, boost consumer adoption and to remain competitive on the international stage.”

A spokesman for StressFreeCarRental.com who compiled the research said: “There is a lot of work to be done by Governments across the world if they are serious about tackling climate change and reducing CO2 emissions.

“Our study shows which countries are leading the world in the race to net-zero vehicle emissions and which are falling behind in the slow lane. And South Africa needs new policies, as well as investment in infrastructure. It may be a while before South Africa breaks the top ten global leaderboard.”