Unless you live in France, you might not think recent mass strikes over the proposed pension reforms in that country have anything to do with you.

But given how fast demographics are changing around the world, that would be a mistake.

If you live in Europe and your parents are getting ready to retire at the age of 65 (the statutory retirement age in many countries), you should know that today there are, on average, 3.4 working-age people to support the retirement of every person 65 and older.

By 2050, the year when you might be expecting to retire, that number is projected to dwindle to just 2. Japan is already nearly at that point. By 2050, more than 35 other countries (about 7% of the world population) will join Japan. This implies a significantly higher burden on workers to support retirees. This dramatic change will have important
economic and social implications that cannot be ignored either by governments or
by individuals.

This phenomenon is not confined to Europe or advanced economies more generally.
Ageing is affecting all parts of the world but to varying degrees. Two main factors are
contributing to this shift in the age composition of the population: people are living
longer and having fewer children. Many countries in the Northern Hemisphere,
particularly Japan, find themselves in a more advanced stage of this demographic
transition. Others, mostly in Africa, are in the early stage. 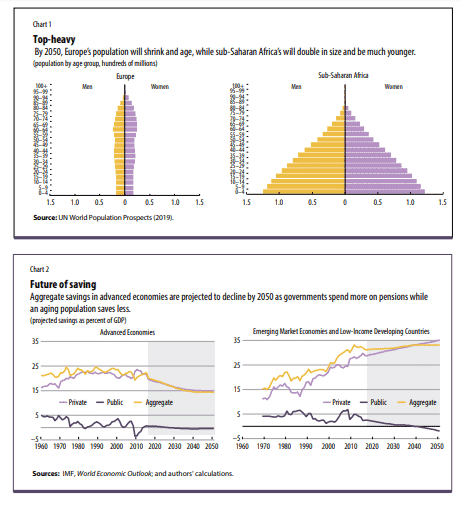 Countries in advanced stages of transition face a shrinking labour force, meaning fewer people to pay into pension systems, while still needing to ensure that people have decent living standards in retirement. On the other hand, countries in the early stage of demographic transition need to create a large number of new jobs every year to absorb a rapidly growing working-age population.

By 2050, there will be a stark contrast between, for example, Europe and sub-Saharan Africa (see Chart 1).

Impact on savings
The ongoing ageing process in large parts of the world implies less saving, all else equal. Generally, saving behaviour follows a life cycle pattern: in their early years of employment, people tend to borrow; during their prime working-age years, people save; and once they are out of the labour force, they spend some of their savings. While this pattern may not
be as pronounced in lower-income countries, it means that societies at a more advanced stage of ageing are likely to see lower aggregate savings.

Indeed, recent IMF research (Amaglobeli and others 2019) shows that in advanced economies, both private and public savings (effectively the government fiscal balance) are projected to decline as a result of more pension spending during the next 30 years (all else equal). This will need to change if younger people in these countries are to enjoy pension benefits similar to those of today’s retirees: longer life spans will require that they save
significantly more and postpone retirement by a number of years.

In contrast, in emerging market economies and low-income developing countries collectively, relatively young populations will lead to higher private saving (see Chart 2). This increase will outweigh an expected decline in public savings as public spending on pensions rises from current levels in these countries.

However, these broad aggregates mask significant variation across countries. This is true even for countries that are at the same stage of demographic transition, because design features of the pension systems matter. Two important characteristics, which affect future saving trends, are the generosity of the public pension system and the presence or absence of a pension plan that offers dedicated pension savings accounts. These accounts are known as defined contribution plans, as opposed to defined-benefit plans, which promise a specified pension amount for each retiree based on a formula.

On average, countries with defined-contribution plans are expected to see their private savings increase compared with countries without them. For example, individual retirement accounts in the United States make it easier to save for retirement through dedicated pension savings accounts. Hence, they help increase private saving.

New models
Public policies play an important role in supporting efforts to provide adequate income in retirement while ensuring the sustainability of pension systems. These policies can be grouped into pension system, financial, and labour market policies. We will explore each of these areas separately. Realizing challenges brought about by the ongoing demographic transition, many countries have enacted significant pension reforms in recent years.

These reforms aim to contain the growth in the number of pensioners. Typically, this is achieved by changing key parameters of the pension system, such as increasing the statutory retirement age and tightening eligibility rules. For example, the recent reform proposal in France aims to raise the full-pension retirement age to 64; the reform
adopted in Brazil in October 2019 increases retirement ages to 65 for men and 62 for women from 56 and 53, respectively. In some countries, such as Cyprus, Denmark, the Netherlands, and Portugal, the statutory retirement age is legislated to increase in line with rising life expectancy.

Reforms have also attempted to target the size of pension benefits by reducing their generosity. This can be done by modifying the benefit calculation formulas, such as the inflation indexation component; rewriting valorization rules (the adjustment applied to past earnings to account for changes in living standards between the time pension rights are earned and when they are claimed), and changing the accrual rate (the rate at which pension benefits build as member service is completed in a defined-benefit plan).

While reducing public pension generosity and limiting the inflow of new retirees attenuate long-term fiscal vulnerabilities and moderate the decline in aggregate saving, such reforms also have distributional consequences. Therefore, they need to be carefully calibrated. For example, linking further increases in the statutory retirement age to improvements in life spans would help slow the inflow of new retirees and encourage older workers to remain in the labour force. It would also be important to include effective provisions to prevent old-age poverty.

In countries with inadequate retirement systems, there is a need to increase pension generosity as well as coverage. China and the Republic of Korea are examples of countries with high saving rates and social security systems with low coverage and generosity.

Policymakers in these countries should, therefore, aim to redirect resources to reduce old-age poverty by expanding coverage of social security systems, raising social pensions (that is, pure cash transfers to the elderly), and enhancing targeted social assistance transfers. These actions would reduce households’ need for precautionary saving while ameliorating inequality and old-age poverty.

In addition to reforms such as those discussed in this article, countries need to rethink their overall pension system architecture. For example, countries could consider instituting public defined-contribution programs—the kind that encourages people to save for retirement through dedicated individual retirement plans—assuming there are the necessary preconditions (Rudolph and Rocha 2009).

Stimulating voluntary saving for retirement through the development of financial sector instruments is another important avenue. Countries that have less developed financial systems should focus their efforts first on increasing financial inclusion.

Globally, 31% of adults still do not have bank accounts; the majority of the unbanked population lives in sub-Saharan Africa (Demirgüç-Kunt and others 2018). Financial literacy could foster a culture of saving and help people better plan for retirement.

Countries with more developed financial sectors could institute policies that support voluntary private saving for retirement. For example, the United States provides tax-preferred retirement saving vehicles, such as 401(k) plans. Tax-preferred general or education savings accounts could also be considered. Participation of middle-income
households would be essential for these plans to generate additional saving rather than simply displacing existing saving elsewhere.

Countries could adopt policies to counteract the expected decline in the labour force. For example, reforms should focus on closing gender gaps in labour force participation, as Italy and Spain have done. The potential here is significant, as only 50% of women participate in the labour force globally, compared with 80% of men (Dabla-Norris and Kochhar 2019).

Promoting access to high-quality, affordable childcare could support an increase in young mothers in the labour market. Since labour force, participation rates tend to decline for age groups closer to retirement, countries could adopt policies that encourage older workers to keep working, especially given the increase in longevity. Governments could make
this easier by reconsidering taxes and benefits that favour early retirement.

Taken together, these policies can dampen projected declines in national saving while improving the sustainability of pension systems and ensuring that people have decent living standards in retirement.