Since its initial introduction in April of this year, the DHL Africa eShop app has seen its user base grow rapidly, and within the first three months of operation, it had already been rolled out to 20 countries across Sub-Saharan Africa (SSA).

DHL Express announced this week that the innovative mobile and desktop platform is now available in 14 additional countries across the region. This increases the platform’s reach to 34 countries across SSA.

Hennie Heymans, CEO of DHL Express Sub Saharan Africa, says that user uptake on the DHL Africa eShop app has been remarkable over the last five months, not only from the number of downloads, but just as importantly, from an order perspective.

“DHL adopted a phased approach for the rollout of the platform on the continent, with the initial launch implemented in 11 countries to test the market’s reaction. Within the first seven weeks, the response from the consumer market was so impressive, that the second phase was initiated – which added 9 more countries to the list. Now we are once again able to build on that momentum, with the biggest single rollout phase so far.”

The DHL Africa eShop app offers African consumers unprecedented access to international retailers on an easy-to-use platform, with great convenience and speed. It also enables many global brands to connect with a captive African market.

The DHL Africa eShop enables African customers to shop directly from over 200 US- and UK-based online retailers, with purchases delivered to their door, by DHL Express. 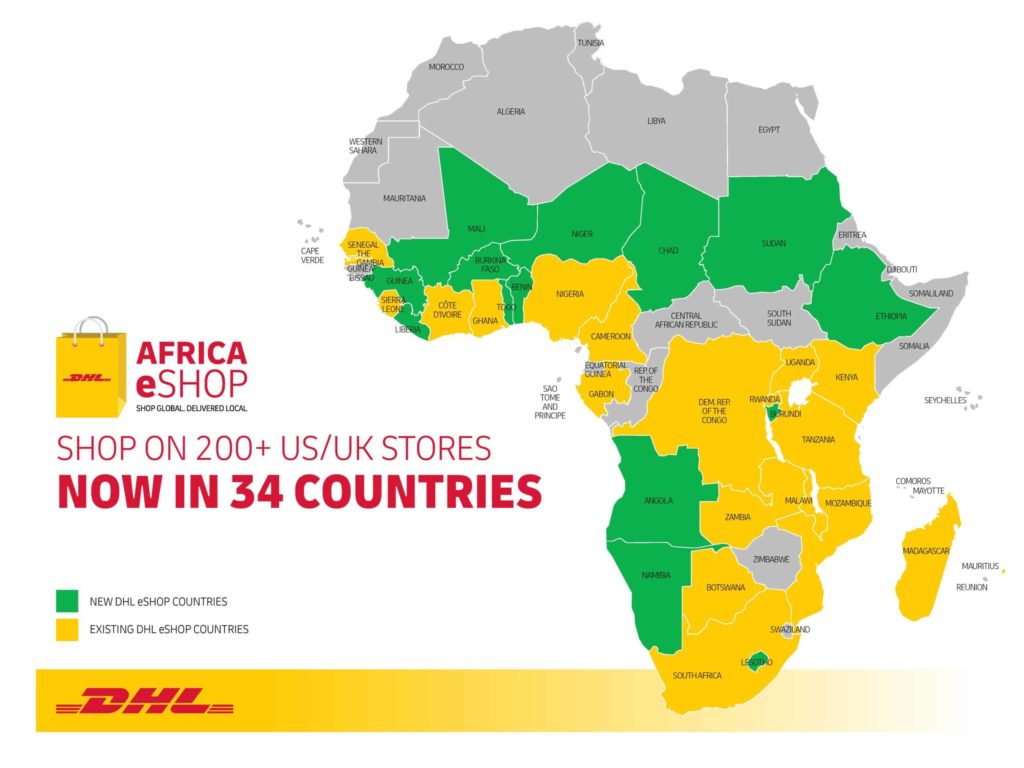 This solution was developed in partnership with Link Commerce – a division of Mall for Africa.

He adds that while Africa’s e-commerce market is still lagging behind the rest of the globe in terms of annual turnover, it may well make significant strides to catching up in the near future.

“A report by Statista reveals that e-commerce in Africa was valued at $16.5 billion in 2017. McKinsey adds to this calculation by predicting that this value could potentially reach $75 billion by 2025.”

As the global leader in express logistics, DHL is well-positioned to connect African consumers with these exciting global brands.

“We are committed to driving e-commerce growth on the continent for etailers as they work to expose their brands to international markets and also for consumers, who want easy access to global brands,” said Heymans.

DHL is celebrating the launch of the new countries with a promotion of $20 flat rate shipping for up to 5 items from over 100 US/UK selected sites to all DHL Africa eShop countries. The promotion is limited to Clothing and Accessory items only, and buyers need to use coupon code CELEBRATE when completing their order.