The MINI Concept Aceman provides an initial glimpse of a completely new vehicle, bridging the space between the MINI Cooper and the MINI Countryman in the model family’s future, says Stefanie Wurst, Head of the MINI Brand.

“This concept car reflects how MINI is reinventing itself for its all-electric future and what the brand stands for: an electrified go-kart feel, an immersive digital experience and a strong focus on a minimal environmental footprint.”

The first MINI crossover model for the premium small cars segment is striking, with purely electric drive, a clear and pared-back design language that has been dubbed “Charismatic Simplicity”, a new digital interior space experience and a material concept which uses absolutely no leather or chrome.

Everything about the appearance of MINI Concept Aceman expresses agility and a self-confident presence. This merges distinctive features of the brand’s two most successful models, the MINI Cooper and the MINI Countryman, to create a modern interpretation of a crossover model.

“The purely electric vehicle concept means the design can again be geared more towards MINI’s traditional basic values, in terms of the principle of using space creatively,” says Oliver Heilmer, Head of MINI Design. “This creates models that take up little space on the road while offering even more comfort, more versatility and more emotion on the inside than ever before.”

The central grille element of the MINI Concept Aceman is completely closed. Matrix LED units are integrated in its upper section to create impressive lighting effects to welcome its occupants.

The MINI Concept Aceman’s youthful, lively character is underlined by an expressive paint finish for the body and a stylishly coordinated contrasting colour for the roof. The Icy Sunglow Green variant body paint, a light turquoise shade diving into gold, features a shade that comes through with varying levels of intensity depending on the light and the perspective. This means that it impressively tracks the subtle three-dimensionality of the surfaces and lines in the exterior. The MINI Concept Aceman roof is painted in traditional metallic British Racing Green. The dark green trim on the lower edge of the body and on the wheel arches, similar to the colour scheme on the roof, lend an attractive contrast to the light exterior colour. Splashes of neon green provide a lively effect of depth.

The concept car’s cockpit is consistently reduced to the bare essentials, just as the designer of the classic MINI had in mind in 1959. Alec Issigonis designed an interior which, in addition to the seats, steering wheel and gear lever, needed nothing more than a central round instrument and toggle switch bar to experience unrivalled driving pleasure.

The dashboard is a flat design element styled like a sound bar that extends across the entire width of the interior in front of the driver’s and front passenger’s seats. 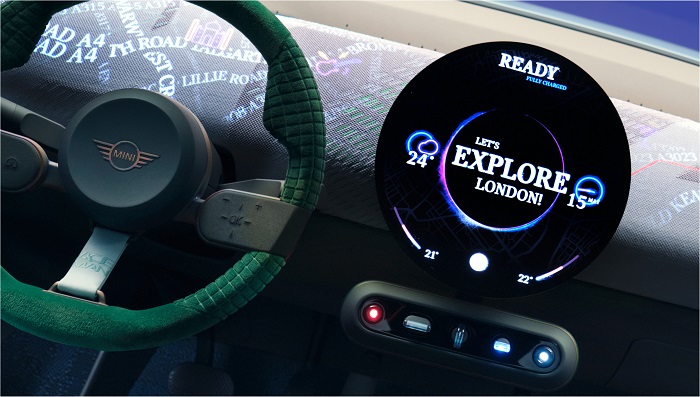 MINI is the world’s first car manufacturer to present a circular OLED display that takes up the entire surface of the central interface. OLED technology gives the display a particularly high-quality appearance and can display strong contrasts and deep blacks. The user interface also features a completely new graphic display, a modern layout and attractively designed widgets. The display and control system in the production vehicle will be based on the latest generation of the MINI Operating System, which for the first time is built on an Android Open Source Project (AOSP) software stack. This allows for an unprecedented and particularly comprehensive expansion of digital features in the vehicle.

The MINI Concept Aceman will be publicly presented for the first time at the world’s largest gaming event, gamescom 2022, in Cologne. The event starts on the evening of 23 August 2022, with the grand gamescom opening show Opening Night Live. This event can be experienced on-site in the gamescom event arena as well as from anywhere in the world via livestream.